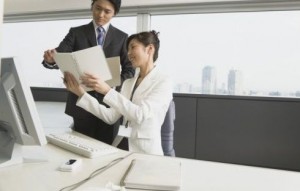 Six sigma tools are the Quality Management techniques, approaches and methodologies used in Six Sigma for the process improvement in an organization. Appropriate implementation of these tools brings about amazing results.

In the beginning of a new process, the effective application of these tools and techniques ensures successful implementation of Six Sigma Quality initiatives.

Six Sigma uses  a great number of established quality management tools and methods which are applied not only in Six Sigma projects but also outside applications as well.

The objective for the development of affinity diagram was discovering meaningful groups of ideas within a raw list. It emphasize on allowing the groupings emerge naturally by using the right side of the brain. Basically it is used to refine a brainstorm into something which can be dealt more easily and that makes sense.

Ishikawa recommends using the affinity diagram in variety of situations like when facts or thoughts are unorganized and not certain, to overcome preexisting ideas or paradigms, to clarify the ideas  and when unity within a team is required.

Analysis of variance (ANOVA) is a statistical term which defines the collection of statistical models with their  associated procedures. Here the observed variance is partitioned into components because of different explanatory variables. Simply, ANOVA produces a statistical test of whether the means of several groups are all equal

Basically, there are three conceptual classes of statistical models:

Fixed-effects models (Model 1): It  is based on the assumption that  the data coming from normal populations which are differing  only in their means.

Random effects models (Model 2) : It is based on the assumption that the description of data reveals a hierarchy of different populations whose differences are constrained by the hierarchy.

Mixed-effect models(Model 3): It explains the scenarios where there is presence of  both fixed and random effects.

Usually  there are several types of ANOVA depending on the number of treatments and the way they are applied like one way Anova,  Factorial Anova, mixed design Anova.

Be the first to leave a review.

Your browser does not support images upload. Please choose a modern one